Text description provided by the architects. The top two floors of a block in Barcelona´s Eixample should be reformed into a single apartment that could take advantage of the existing terraces.

The lower floor consisted of an apartment of about 65 m2, heading the street and getting some light to the kithcen and bathroom via an inner patio. The upper apartment, of about 40 m2, had been built later, probably during the 60s. It consisted of a simple volume built on the terrace, separated from the street and from one of the neighbouring buildings, leaving an L-shaped narrow open space.

The organization of the apartment orbits around the staircase. This element becomes something more than just a communication device between the two floors by absorving the kitchen and a storage space on the lower level, and the study and laundry space on the top floor. The staircase is as well the space for visual relationship between the two floors, via an inner window and a big opening on the upper studio which allows to get visual contact from the upper floor until the kitchen downstairs. This easy visual contact helps you understand the flat as a whole, and not just as the superposition of two different floors.

Given the surface of each floor, we understood that we had to organize the lower one as the  main floor, which accommodates the entry, living room, dining room, kitchen, a room for children and a bathroom; while the upper floor is a more intimate place for the parents, with their bedroom, bathroom and a study room.

On the outer spaces, a folding ladder allows the lower terrace to gain room, leaving the top terrace as a space for occasional events. A shade on the top terrace offers shadow to all these spaces and, most important, closes the space giving a feeling of being somewhere between inside and outside.

The existing hydraulic floor tiles had been removed in earlier refurbishments and there were only enough pieces for half of the lower floor surface, but we were lucky enough, and we looked for such luck, that at the same time that we started the works, there was an other refurbishment in the same block where they were going to throw all their floor tiles away. We picked those tiles and together with the existing ones in our apartment we checked the possibilities for different patterns on the lower floor. The final solution was to place the different tiles in stripes, despite the walls and partitions, so that we gained a feeling of continuity that helps you understand the floor plan as a continuous space.

On the lower floor, all the woodwork, both doors and windows, were preserved, maintaining the “spirit” of the Barcelona Eixample that this flat once had. Upstairs, where there were no elements worth preserving, both floor and windows were replaced by new items. 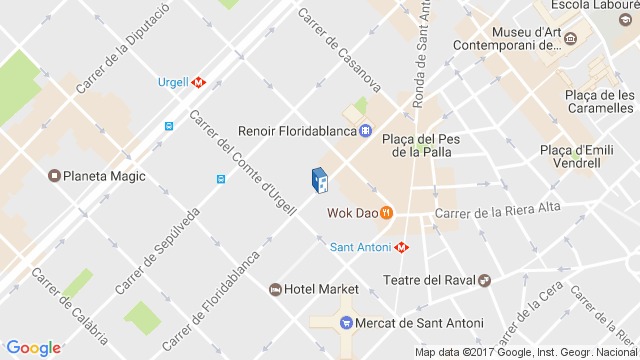 Location to be used only as a reference. It could indicate city/country but not exact address.
Share
Or
Copy
About this office
Anna & Eugeni Bach
Office
•••