Save
MUSEUM OF WISCONSIN ART (MOWA) / HGA Architects and Engineers 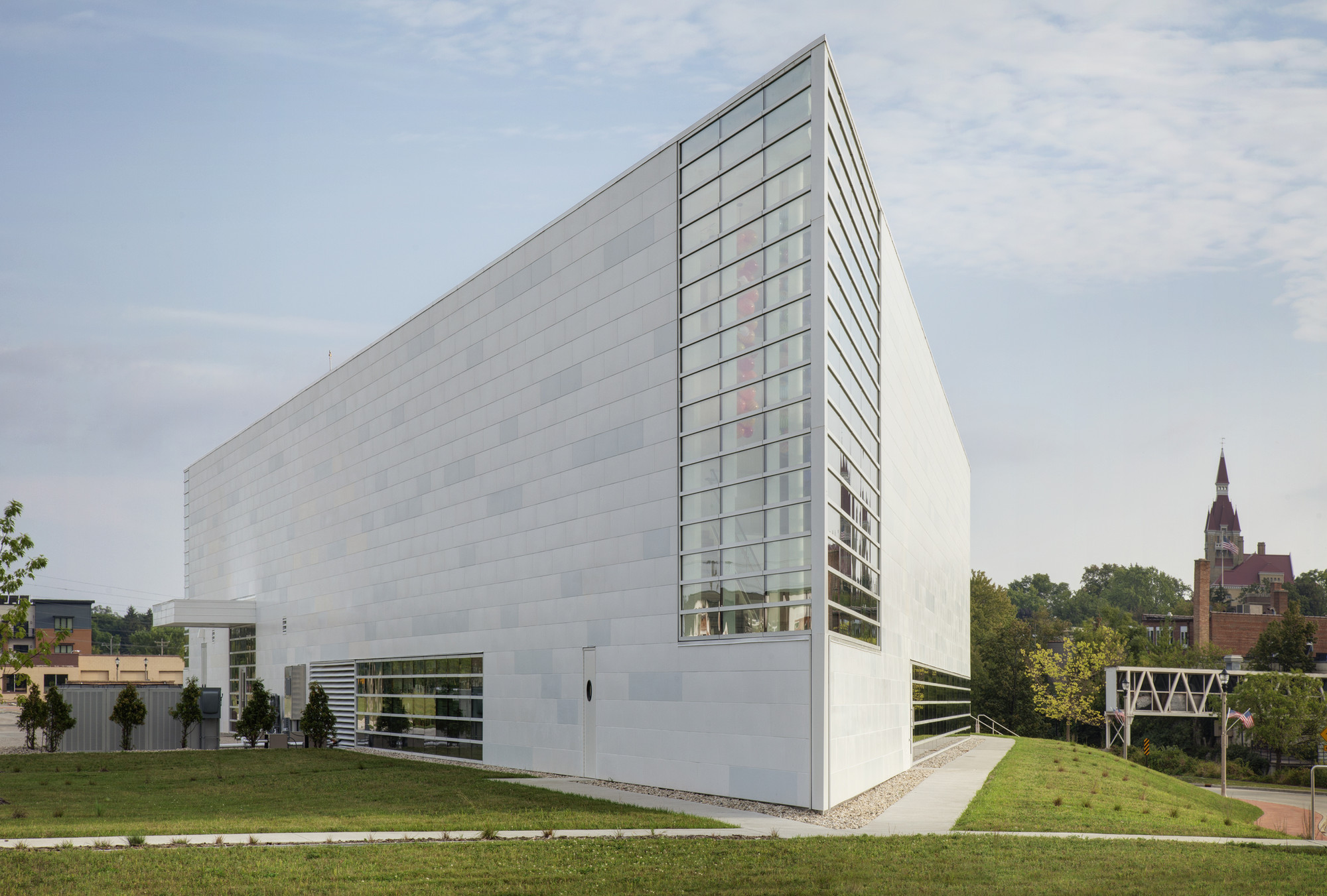 Text description provided by the architects. The new Museum of Wisconsin Art (MOWA) in West Bend, Wisconsin, designed by Jim Shields, FAIA, Project Lead Designer at HGA Architects and Engineers (HGA), achieves a subtle balance between architecture as art and architecture as a neutral setting for art. The crisp, triangular geometry of the 31,000-square-foot, two-level museum moves from a glass-enclosed entrance at the southwest corner to a wedge-resolving point at the opposite end, where a glass curtain wall reveals an interior stairwell. Clad in custom, horizontal, modular fiber-cement panels in three shades of white, the surface of the building projects a soft and gentle variegation of color.

Inside the entrance is a soaring multipurpose atrium and event center. A sweeping, glass-paneled grand staircase leads to the second-level galleries, where a series of two-foot-thick partitions divide the space into five connected galleries that progressively taper within the triangular form. Adjacent to galleries for works from the permanent collection is a gallery for temporary exhibitions that has a balcony overlooking the atrium below.

The striking new structure resolves several issues the museum has faced for years. In its former home, the museum lacked square footage and museum quality space; energy efficient mechanical systems safe for artwork; storage for artwork; and the ability to tell the story of Wisconsin art. The museum was also faced with building a new facility during the recession on a challenging site. HGA’s Milwaukee office met these challenges, transforming the regional gallery into a major state attraction and destination museum.

Another renovation vs. building new

Originally located in a neoclassical building in downtown West Bend, the original museum had undergone several expansions since being founded in 1961. HGA conducted a facility analysis and discovered each expansion had its own mechanical system—resulting in energy inefficiencies—and no vapor barrier, resulting in humidity conditions harmful to the art. After further space-utilization studies and cost analysis, HGA determined a new building would be more cost effective and programmatically efficient than upgrading the existing space and integrating the various mechanical systems.

After the museum Board of Directors and staff agreed to a new structure, HGA’s design team created a package of engaging schematic renderings that museum representatives used during community-based fundraising. The successful fundraising campaign allowed the team to complete construction drawings and secure competitive bids in a tight economic climate, bringing the museum in on budget.

HGA also reviewed, with the Board of Directors, several sites in the City of West Bend. Together they negotiated with the City for a sliver-like, triangular site on the Milwaukee River, across from downtown. HGA created several designs that addressed the museum’s needs and the rigors of the challenging site, presenting the designs at planning meetings with the Board, community members and other stakeholders.

The resulting design is a triangular building on the triangular site, adjacent to a bend in the river. In correspondence with the winding waterway, the building facade bends gently to meet the river. A series of windows opens up the triangular form, providing passersby on the river or on the street with views into the museum. The building incorporates approximately 5,100 square feet of windows. At the sharp point of the structure’s triangular form, an aperture enclosed with glass offers museum visitors views up the river. The glass-enclosed area also glows at night, a beacon for arts and culture in the city.

Interiors for telling the story of Wisconsin art

The museum includes 12,000-square-feet of gallery space, in addition to the atrium, a gift shop, two education studios, administrative offices, a conference room, archives for works-on-paper, and an innovative, visible storage area for paintings.

The glass-walled atrium has 30-foot-high ceilings; daylight also streams through clerestory windows. HGA carried the river’s and the building’s exterior curves inside via a sweeping glass-and-concrete staircase leading to the second level. Also, a curved community gallery with windows overlooking the river stretches from the entrance, past administrative offices and classrooms, and onward toward the building’s point and secondary stairwell.

Most of the art is on the museum’s upper floor, in galleries for the permanent collection. Walls bisect these spaces at regular intervals, creating a series of discrete galleries for communicating the history of Wisconsin art, from early 19th-century objects to the work of living artists. These permanent-collection galleries have maple flooring. Behind the galleries is a secondary circulation corridor with polished concrete floors resembling terrazzo. The corridor enables visitors to move between spaces without backtracking.

Adjacent to the permanent-collection galleries is a rotating-exhibit gallery, which includes a balcony overlooking the atrium below. Walls of whitewashed drywall, large-formatted acoustical ceiling panels and diffuse up-lighting create neutral white-cube spaces for displaying the art.

A museum’s art storage is nearly always hidden away from the public, in areas inaccessible to visitors. To expand the potential for storytelling at MOWA, and provide visitors with the opportunity to see stored paintings on a rotating basis, HGA designed a glass-enclosed room for work not currently on exhibition.

The glass room has 13,620 square feet of hanging space. Located between the main exhibition gallery and the collection gallery, the room lets MOWA display additional artwork while simultaneously providing visitors a sneak peek into the museum’s behind-the-scenes storage area. Museum employees rotate the works closest to the glass walls on a regular basis, to provide visitors with changing glimpses into artwork not currently on the museum’s walls.

The building uses a relatively new mechanical system called “displacement ventilation” in the galleries. More energy efficient and safe for art than typical systems, displacement ventilation brings in low-velocity air lower to the ground, rather than blowing air down from the ceiling. Since air is delivered lower in the room, winter temperatures needn’t be as warm and summer temperatures as cool, resulting in energy savings.

Because air isn’t blown down over the art, paintings, sculptures and other objects are less likely to develop dust-attracting static charges associated with typical mechanical systems. The 2-foot-thick gallery walls house all of the equipment needed for the system, including low-velocity air supply in the base of the walls and return air at the top of the walls.

HGA not only resolved the many issues MOWA faced in building a new facility, the design team created a museum that’s a work of art in itself. MOWA’s geometrically striking form and glistening white façade has fast become a city landmark that increases statewide visibility, attracts visitors throughout the region, and beautifully tells the story of Wisconsin artists and their work. 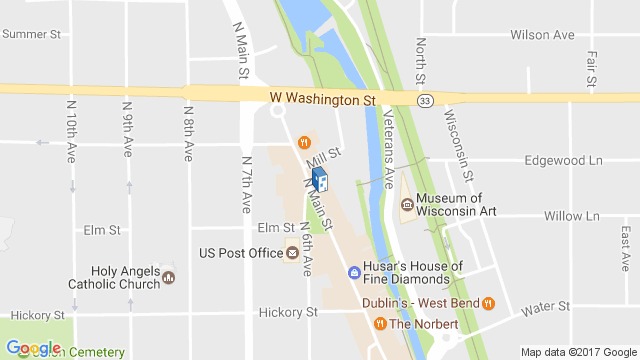