Text description provided by the architects. The museum building is a path which the visitors climb to overcome the elevation difference of some twenty meters, from the access road to the plateau on which the Vučedol culture archaeological findings have been discovered. Passing through the museum visitors get all the necessary information about the Vučedol culture, and come to the place of the archaeological sondages aware of importance and meaning of that place. Exhibition areas of the museum are a series of terraces that climb slowly adapting to the topography.

Openings to the northwest are orientated towards the Danube river. Instead of reaching the archaeology plateau through the museum one can also use the museum's serpentine green roof.

Vucedol is located on the right bank of the Danube River , 4.5 km downstream from the center of Vukovar. Culture that bears its name , the Vučedol culture ( 3000- 2400.g.pr.Kr .) , is contemporary with Sumerian period in Mesopotamia , the Old Kingdom in Egypt and the beginnings of Troy. In its initial phase its located in Srijem and Eastern Slavonia , and in the late stage it spread over the whole of Croatia and parts of 11 countries in Central and Eastern Europe.

First archaeological findings, on the site, made the family Streim in the late 19th century, who was the owner of Vučedol site and whose reconstructed house still stands in the archaeological park. This prompted further research, of which the most notable was the one made in 1938. when a German archaeologist, Robert R. Schmidt excavated Megaron and found the world famous Vucedol Dove.

All of Gradac was a casting center, and  because of casting and the poisonous gases released from that process, Gradac was separated from the rest of the village, and was as a kind of acropolis and religious center of the village. The Vučedol houses had numerous cylindrical tombs that were used for storage room, and sometimes as the tombs for ritually sacrificed animals and humans. Vučedol houses are characterized by rounded corners and walls of wicker, coated with clay, with a large fireplace in the center.

Systematic research of Vučedol began in 1984. and already at the beginning of the excavations, there was the idea of an archeological  and a museum on the site of the excavations. The research stopped in the early 90’s because of the war and resumed in 2000 after the de-mining of the area.

The archaeological site extends to just over 6 acres and is mostly covered with woods and vineyards. The terrain rises from about +90 m AMSL where the entrance to the museum is, to approximately 110 m AMSL where the Gradac site is located. The main buildings in the park are: the museum, restored Villa Streim (which will serve as a research center for the archaeologists), old crafts workshops (for demonstrations of crafts from Vučedol culture), underground building on the site of Gradac and reconstructed building of Megaron above it.

The basic idea behind the concept of the museum was integration into the terrain, which is achieved with the museum design which is mostly buried in the ground and only the façade is open to the landscape. Its shape, as serpentine, follows terrain, and on whose green roof you can reach the archaeological sites over the museum. Integration into the terrain is achieved, except with serpentine form, by selecting materials, and so was brick selected for the outer coating, a natural material that most resembles the ground at the site.

The interior of the museum is divided into different sections. Ground floor contents, such as coffee shop and dressing rooms, are designed for visitors. Offices and storage are accessible from the ground and are partially placed in the basement. The rest of the interior exhibition space is divided into several levels, interconnected with ramps. On separate levels of exhibition space it’s possible to exit the museum, and continue touring on the roof surface. Due to the fact that the building is mostly buried, but also because of the depth of space, atriums were made to further illuminate the interior space.

The entire structure of the museum is made of reinforced concrete. It consists of a foundation slab and the longitudinal walls between each serpentine, transverse trapezoidal walls, longitudinal and transverse beams and roof slabs. Treatment of the interior is simple; the walls were left as bare concrete, finally painted in black, and on the floor light oak was placed.

As part of the future park, tourist and recreational activities are planned, as well as a large parking lot for cars and buses, and a pier for tourist boats. 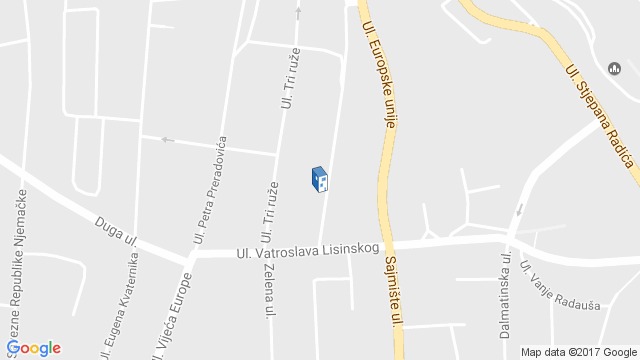 Location to be used only as a reference. It could indicate city/country but not exact address.
Share
Or
Copy
About this office
Radionica Arhitekture
Office
••• 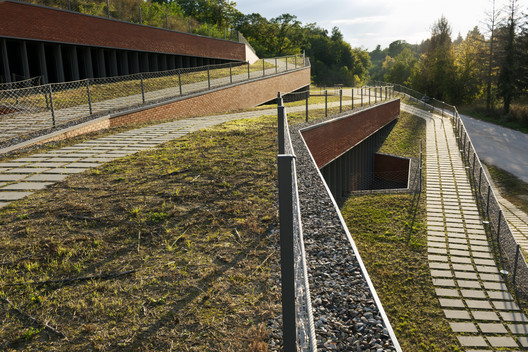