Text description provided by the architects. This house located in the Central Valley near Talca is almost a statement of how to accomplish architecture in Latin America.

As the design and building process were so unsteady, starting from the site -located in an almost impossible steep hill-, to the budget limitations, a very basic grid configuration evolved to a much multifaceted formal result; both simple and complex at the same time.

Curiously, the principal façade when arriving to the house is the roof, designed as a complete terrace to a 360º view of the valley but also as a structural complement underneath the deck that overtakes the horizontal forces in case of earthquakes, which allows to avoid cross-bracing in the windows towards the appealing views. This wooden “envelop” is extended and returned to block excessive sun exposure in the hot summer of central Chile zone, although lets the sun to enter in the fresh early morning and in hard winter in a more inclined angle.

Plus, natural cross ventilation through opening of all the glass planes through the patio and external façade permits a regulation of temperature in a passive mode. Unexpectedly, this calculated geometry relates almost candidly to the nearby hills topography.

Beyond demanding technical issues, the project spatial organization outcomes -as it was never determined- in a open space around the patio which includes the kitchen and could displayed as the inhabitant wishes, switching dinning room to living room or any other instance as desired. A more stable programme is the principal bedroom with a private bathroom and terrace towards the view since residents could enjoy it more during the morning and late night rather than the day. Plus, an optional studio and/or guest room in the opposed side is available aligned with a more “public” shower, toilet and laundry facilities. All fits in less than 104 M2, nevertheless all spaces connect to each other in exterior or interior ways: a continuous promenade with no dead ends as is to integrate all the spatial qualities and views of living in a steep and almost non urbanized area, nevertheless 5 minutes to the city.

All this was reached rather than in a quest for certainties, through a trial and error modus operandi whereas all design resources at reach where unconsciously or more rationally implied: from Corbusier’s 5 points for a new modern architecture, to nearby Smijan Radic’s Copper House 2, or/and references passing through Mies structural explicitness through OMA and PLOT experiments (All apologies).

The result? A mix, a bastardized design, a fusion, like a crossbreed dog, as named in Chilean: A Kiltro (mixed-breed dog). 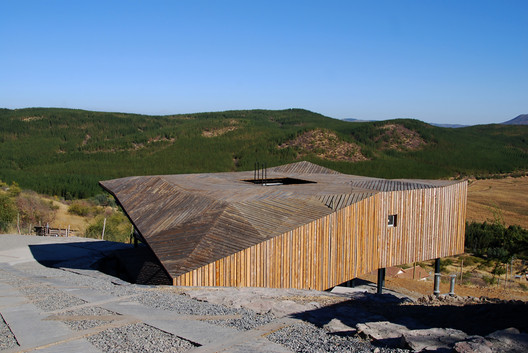