Text description provided by the architects. Jinan stretches out westward to the high-speed Beijing-Shanghai train station. Planned for the neighbourhood: a cultural centre with three auditoriums. Our proposal: to build the three auditoriums (the Philharmonic Orchestra Hall, 1494 seats; the Opera, 1640 seats, the Multifunctional Hall, 472 seats) in the three separate spaces on the neighbourhood’s main thoroughfare, in the centre, facing three towers.

The local authorities saw in this configuration three mountains above three springs – feng shui perfection – and a true Chinese portrait of Jinan and its region, the Shandong.

The project is located at the axis cross of the new metro line and the Lashan River.

The east–west axis extends from the new high speed train station to the town center the north-south axis along the Lashan River. Both axes are leisure zones, composed out of public space and public gardens. The character between the two perpendicular parks should be differentiated.

The place where the two parks intersect will be of course the most symbolic one in the new town, concentrating its ambitions as a living space for “better life”.

Relations of the cultural centre with the environment

The main relation of the culture Complex is with all the residential areas of Jinan City, ancient and recent, since the Cultural complex above all an equipment for Jinan City Citizens. This relation has to be made mainly by public transportation systems, metro and buses. The distance to the metro is particularly important and should be one of the most decisive factors considered in the final choice of the site for the Culture Complex.

The relation with the region and more distant places, less important, can take benefit of the link of the central metro line with the high speed train terminal.

People can walk from each side of the Water Park and green axis to the site without crossing directly the street. The pedestrian access is provided by bridges on an upper level 6 to 7 meters higher than the street. The “bridges” are designed to disconnect the pedestrian from car noise and danger.

The building complex of the Provincial Cultural& Art Center Plaza is situated in the middle of the Central Park at the gravity centre of the new metro line. The geometry of the whole complex takes reference to the centre of a partially covered public space the Central Plaza.

In the north of the project 3 towers border the building complex with their common base. The towers will have hotel, short-term apartments and office functions, the base provides common services of these functions.

The complexes’ south is occupied by the Grand Theatre. Each of the 3 audience halls, the Opera Hall, the Concert Hall and the Multifunctional Hall forms a big “shell type” building, so that a composition with the towers is formed,

the public space the “Central Plaza” which is situated above the commercial centre at the same level as the bridges who give access to the site.

The metro station is on the east edge of the side. In the west of the Central Plaza a large terrace can be found where public animation, restaurants and bars profit from the river border.

The building complex is situated in the park surrounded by landscape. All building parts form a composition around a gravity centre in the middle. The 3 roof shells of the Grand Theatre span a force line to the 3 towers. The common architectural language of all building parts will give the identity to the site and the whole New West Jinan area. The building has a highly memorisable icon effect. Public life will be concentrated in the centre of the complex so that cultural exchange can happen. The roof on each side of the Central Plaza will give shelter to the visitors while the in-between space is open and glazed to bring in light into that open space. The glazed centre part will permit to cross from one to the other side even during the rain periods. 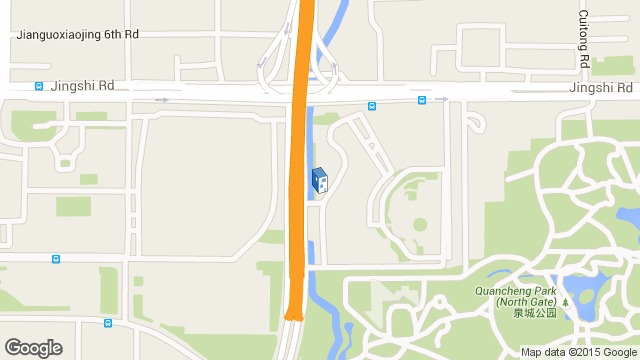 Location to be used only as a reference. It could indicate city/country but not exact address.
Share
Or
Copy
About this office
Paul Andreu Architecte
Office
•••
Richez Associes
Office
•••
Beijing Institute of Architectural Design
Office
•••