Text description provided by the architects. This is a house for a young couple and their child, located in Matsudo, Chiba Prefecture. Matsudo City has a background that has developed as a residential area on the outskirts of Tokyo from the 1960s. This house was planned the rebuilding of the house, which was built at that time. I seemed to have been asked to build a house as a new symbol in this place by a young family with the hope of the future.

So, I hoped to propose the house as a living symbol by utilizing a big roof and structural member actually in their daily life rather than just an image.

At first, I placed a big roof on the site and arranged the eight Y-shaped wooden frames in it. I planned for each space by hanging second floors and loft floors from them. Like a bunch of attic beams of traditional wooden architecture, Y-shaped frames made of bonded wood run through the entire house. And the six floorboards are hung from them at a different level. Depending on the level and location of floorboards, the distance from the big roof and other living space will be changed, the space of under the floorboards as well. Although the whole house is just one space under a big roof, it divided loosely with Y-shaped frames and floorboards, so that people stay each space feeling each other. 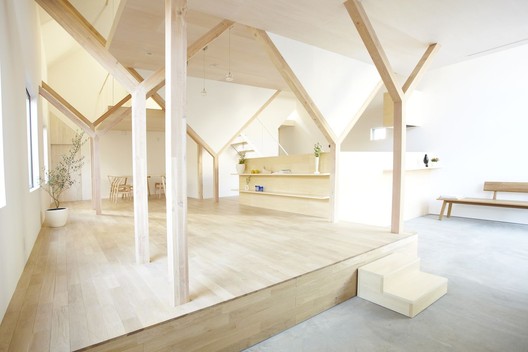