Text description provided by the architects. This project involved the rehabilitation of a 53 sqm apartment for a young couple. The apartment, located in the top floor of a building of 1910, was originally divided into five rooms, besides a very reduced kitchen, a bathroom and a storage space under cover with a maximum height of 1.50 m.

A new space, which is completely different, appears. It was there, waiting to be discovered. Its conservation becomes the goal and inspiration of the project.

To improve the habitability and spaciousness the interior was emptied. Interior divisions were eliminated, as well as the ceiling which covered the original wooden triangle beams.

In order to do so, it is decided to concentrate the more technical uses in a simple and light structure. Around it, the rest of spaces flow being, at the same time, visually isolated.

To materialize this idea a wooden box holds the kitchen front, WC, laundry, sinks area, shower and a small closet. This wooden piece was conceived as a piece of furniture. It was built in maple wood as a tribute to the owner’s love for Spanish guitars, usually made of this material.

As this was a rehabilitation work it was considered important to maintain a reference to the past, discovering what already existed placing it in a new context of time but keeping its essence and history.

Existing elements and constructive systems were recovered: lightweight interior partitioning, shutters, entrance door, wooden structure, new pine flooring planks. All the partitions were assembled by a carpenter. There is no tiling. The shower was installed using phenolic panels which were grooved to avoid slipping. 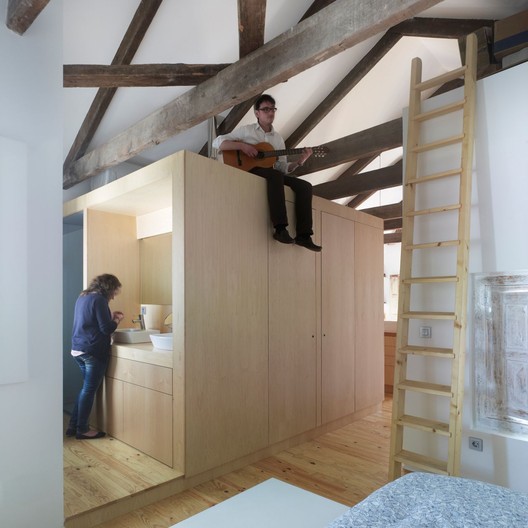