Concept
Two churches, one Protestant and one Catholic, have been erected in one building on the central square of a new district of the city of Freiburg, Germany. The building is designed in fair-faced concrete both on the inside and out. The design of the multi-aisle structure makes it possible to move the limiting inner walls of both churches to the side and then use the resulting area as an ecumenical church space.

The building, with an overall height of 13 metres, is partly a single-storey structure, progressing to four storeys at times. The length of the building is limited by two 40-metre long walls in a free geometrical form: the walls are slightly “folded“ at irregular intervals and are inclined inwards and outwards. In this geometry, the west wall is double-walled with a wall thickness of two metres. Together with the inclined embrasures, the thickness of the wall creates a marked light for the church area.

All the walls, including the interior walls which can be moved on rails, are made from fair-faced concrete. The moveable walls are approx. eight metres high and are moved by electric motors. Each wall weighs approx. twenty-two tons. These four walls were first constructed outside the actual building. With the aid of heavy-duty armatures, they were then hoisted by crane over the outer walls and set on the rails.

All the outer walls are made monolithically from lightweight aggregate concrete to avoid any necessary thermal insulating layer. The walls are approx. 40 centimetres thick to achieve the heat insulation values required.

The construction firm contracted had the task of creating an almost non-porous surface homogenous in colour despite the high viscosity of the lightweight aggregate concrete and the inclined form panels. Another requirement was to design the breaks in the walls in a single, continuous line over the overall height of the building.

Building Construction
In conjunction with the company responsible for statics, a hybrid building shell construction was developed, in other words a complex, static system made from B25 lightweight aggregate concrete for thermally insulating the exterior fair-faced concrete walls and from B25 normal concrete for the remaining supporting constructions.

A statics 3-D model was developed from the two-dimensional architectural plans. The floor plans were represented by finite elements, each comprising the shape and quality of the walls. The rigid structure distributes the load onto the lower foundation soil while making optimum use of the permitted foundation pressure. The overall system makes it possible to accurately  determine the carry-over forces to the construction joints of the walls. Further development on the 3-D model based on statics calculations meant that three-dimensional geometrical plans of the form panels could be created so that the construction firm contracted was able to reliably develop the form panel system.

Production
To create a very pale concrete from the natural colours of cement and aggregates without the addition of pigments, approx. eight sample walls were created. These samples were also used to test concreting the most geometrically complex parts, such as backwards-inclining walls. The outer walls were concreted in three sections with a height of approx. four and a half metres.

The form panels were cut at the factory using digital patterns and were delivered to the construction site in complete modules.

Due to the unusually high ambient temperatures (summer 2003), in conjunction with the large wall thickness, the hydration heat when setting the concrete resulted in temperatures which meant that temporary formwork water cooling was required.

Building Services Engineering
A floor heating system, powered by urban district heating, was installed in all the rooms. The rainwater reservoir deployed enhances the range of possible uses of the water in the sanitary facilities.

Energy Saving
As the city of Freiburg functions as a role model with regard to low-energy buildings, all public buildings are constructed in accordance with the Low Energy Building Standard as per the Freiburg calculation method. This results in a permitted thermal energy consumption value of 65 KWh/(m2a) for areas with normal temperature. The existing energy consumption is 59 KWh/(m2a) and thereby clearly meets the specifications. 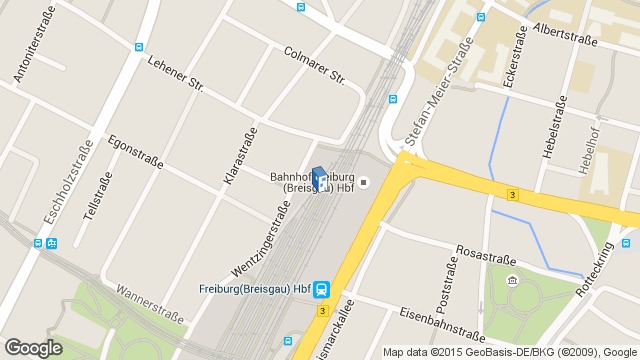 Location to be used only as a reference. It could indicate city/country but not exact address.
Share
Or
Copy
About this office
KSG Architekten
Office
•••