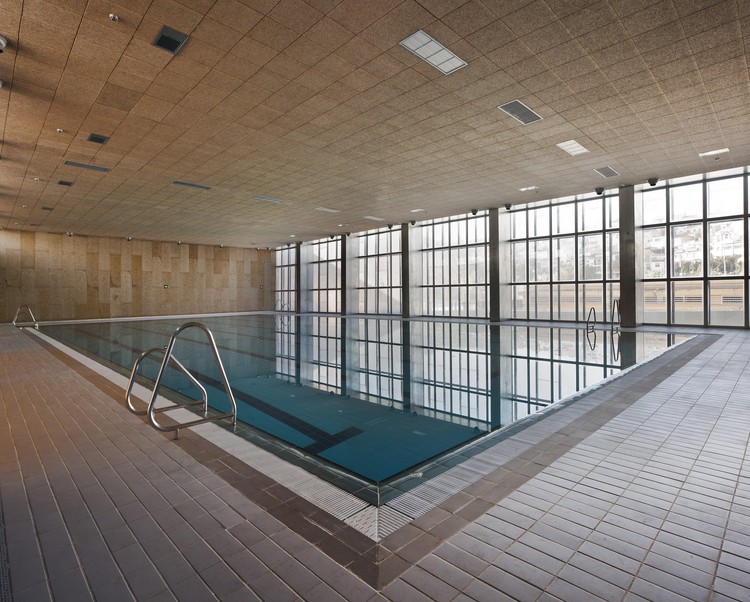 The existing sports complex contains different constructions, from different stages and typologies, which causes disorder and an difficult understanding of the installation; the intervention that arises (heated swimming pool) aims to make a neutral building to establish some order in the set, also serve to control access to all facilities.

We project a prism that has a skin of galvanized steel Tramex, that reinterprets the traditional lattices that allow you to see without being seen, hiding the interior and and showing the city to the users, and also serves as a solar control element.

The projected continuous covering makes the building reveals the observer with different character according to light incidence: the volume is seen dense and opaque when viewed from the south, dematerialized while if viewed from the riverfront promenade located north.

The lattice protects the building from unwanted summer sun exposure in all its facades, and allows capture by the south side of 50% of incident radiation in winter, helping to reduce the thermal loads, and therefore, energy consumption and CO2 emissions.

Inside, the lattice refracts unwanted solar radiation, distributing it uniformly so that there are no glare, resulting a homogeneously illuminated space, very comfortable.

The proposed section also contributes to the reduction of the energy demand: the main volume, in which is the pool, opens to the south and is protected from the north by the volume of services, that in turn has a gallery on the north side that acts as a “cushion” respect to the exterior.

Projected installations integrate renewable energies as the base of the project : the hot water production for dressing rooms and swimming pool is solved with solar panels and biomass boiler, so in the annual cycle of operation savings in CO2 emissions exceed 75% compared to a conventional installation (There are not emitted 237 tons of CO2 per year).