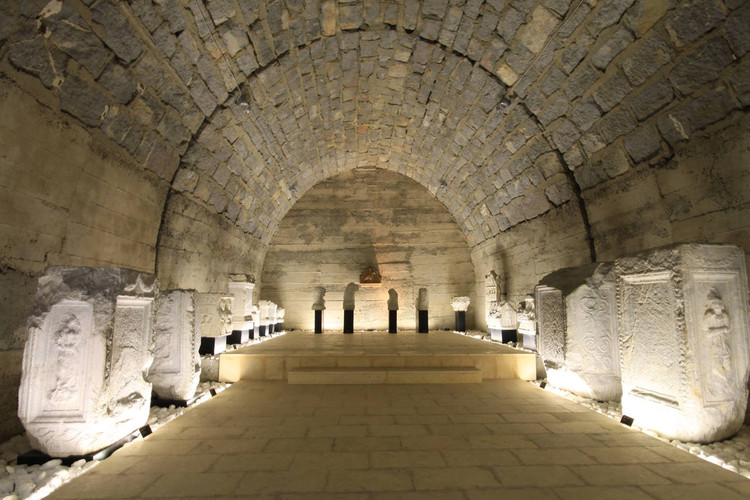 Text description provided by the architects. The town of Uzice was a historically important site, from the age of the roman empire, throughout the middle ages up to world war two and the seventies. In 1961 the town got its ultimate reward –the great Square, designed by MiloradPantovic, an associate of le Corbusier, and StankoMandic, both famous architects at the time, and was ordered by the Yugoslav president, Josip Broz Tito. The great town square turned Uzice from an oriental, mostly-rural town into a modern, prosperous western industrial town. Yet in recent decades, Uzice has degraded culturally and administratively to an almost dead-end town with a disturbing level of unemployment, corruption and street violence.

In such harsh environment, archaeologist LjiljanaMandic together with a father-daughter team of architects, Mihailo and LjubicaJovanovic, developed the idea to transform an old under-the-hill fire-wood shed into a Lapidarium and place Roman monuments, that have been collected around the town for sixty years, inside. After two years of countless efforts of the archaeologist and the architects, the ministry of culture finally gave the permission to start the project, allowing a modest, yet a sufficient sum of thirty thousand Euros.

The shed is located near the building that used to be the Bank of Yugoslavia in WWII, now the National Museum. Its entrance is ground level, however its front and only exterior wall is in the line of a hill, so the interior is deep underground.

The old shed had a wet floor of mud in the front part and a concrete cascade in the back. The ceiling is a vault – like structure made of concrete and stone blocks, damp, green and orange with moss. Although it was shabby, it had a certain mystique, elegance and a sense of dignity.

The idea of the architects was to preserve all that refinement. As the word ‘lapidarium’ derives from a Latin word for stone, the architects wanted to stay loyal to the stone and use it wherever possible. The main floor is covered in white marble, the side stripes are of white gravel. Part of the plateau of the Lapidarium is covered by the very same marble that was originally on the upper cascade of the main town Square by Mandic&Pantovic. That marble had been removed from the Square and put away in the beginning of 2000 by the town’s government and changed for some new stone blocks.

The architects had great ideas for illumination of the Lapidarium, however, they had to improvise with the resources they were provided and make the most of. In order to emphasize the mystery they placed the light sources below the stone sculptures, giving the whole space a new dimension.

The central motif of the Lapidarium are the four lions that were placedto guard the altar in ancient times. Lapidarium will prove to be of huge significance for the town of Uzice. For what is made of stone lasts forever and preserves the greatest ideas of the age when it was made, combined in this case with the fact that It re-discovers the richness of roman art and culture. That way, the Lapidarium did not just breathe life into ancient Roman stones, but also revived the stones – and the idea carved in the stones - both from the Roman times, and when Uzice reached its peak in the XX century. 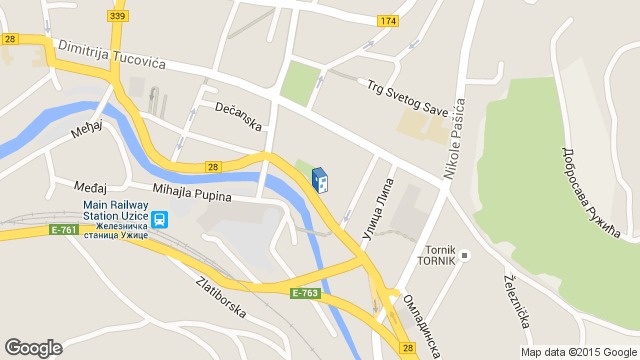