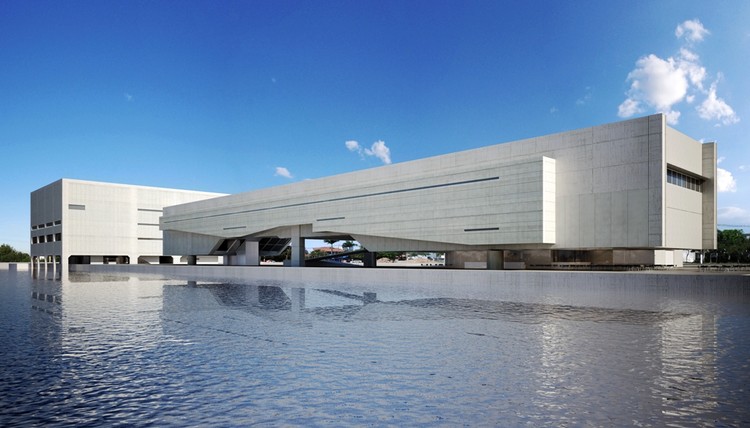 The astounding confrontation between nature and construction, in this place, suggests the suspension of the buildings in the air, untangling the visuals for the landscape and the spectacle of the sea and dock`s works.

The exceptional orientation allows the circulation between the exhibition areas of the Museum to happen in the external south side of the building, through crystal clear ramps with a view for the ocean, the ships and the mountains in Vila Velha.

The great plain field between the avenue and the pier wall shall be free for access and destined to the public, for shows, cafés, bookstores, open-air exhibitions.

The Museum shall have wide openings to the square, without direct incidence of sunlight. The light is reflected on the floor and there is a view for the events that take place in the square.

In the Theater, the inappropriate soil for construction below the sea level, it was necessary to raise the level of the stage and the audience seats, in order to accommodate the backstage and support equipment.

Composed by a Museum and a Theater equipped to host large scale art events, the architectural set designed for Cais das Artes (Quay of Arts), in Vitória, has as a main characteristic valuing the landscape and the historical surroundings of the city. Located on the Suá Bay, in a large plain field leveled with earth, in front of the canal that configures the island of Vitória, the project is a compliment to this territory, built on the astounding confrontation between nature and construction, in a city that is everyday excited due to the presence of the port and to the constant and energetic work done in the docks.

Such valuing means the decision of configuring the plain field as an open square for the entire city to enjoy: a public space next to the ocean. Furthermore, this implies on a decision to suspend the buildings as to allow the complete view from the square to the surroundings. That is, not only to the dynamic spectacle that is the work being done in the sea, connected to the port, but also to the natural and architectural patrimony of the city, specially the mountains in Vila Velha and the Penha Convent, located across the canal, in front of the project site. Therefore, this is an urban-oriented architectural action, in the sense of adjusting history and geography to a desired view of the present, indicating at the same time a museological conception, an effort to combine art and science, under an integrated perspective.

Counting with facilities such as cafés, bookstores and spaces that can host theatrical shows and open-air exhibitions, the new square shall be an attraction of the city’s cultural life. A place that, for its inherent spatial characteristics, allows the public to unveil the overwhelming landscape from a privileged standpoint.

This effect shall be amplified even more during the Museum visiting course, whereas the vertical circulation through ramps provides crystal clear platforms that create porches for the appreciation of the natural surroundings. Such platforms shall be built at sudden levels. On the other hand, the set shall constitute a new visual reference in the landscape of the Vitória Bay, which can be appreciated from several standpoints or older belvederes, such as the Convent, located on the top of the Penha Mountain, in Vila Velha.

With a climatized Museum counting with a 3,000 square meter exhibition area and a Theater with capacity for 1,300 spectators, prepared for multiple uses, the Cais das Artes set aims at providing the city of Vitória with the necessary apparatus to receive major artistic spectacles, qualifying the town as a cultural host of national importance. The space is an attempt to include the city in the route of itinerant events (music concerts, dramatic plays, dance shows and art exhibitions) that travel through the great Brazilian capitals, to host great events, festivals, or even home based dance and music companies.

Spatially, the architectural set integrates an urban expansion area that has been receiving significant investments, both from public and private initiatives, and now it shelters new and large scale equipment. The region has also been hosting administrative buildings, courthouses, shopping malls and residential buildings. It is clearly a strategic region for the economic and cultural development of the city.

It is also for that reason that an exemplary intervention is so necessary, considering the risks that such processes bring to the natural and constructed patrimony of a city under development. Conscious of that trend, the project tries to discipline the urban occupation on the shore, bringing light on its own processes of material constitution: the technique applied in the embankment, the stone pitching, the dock walls, the existence of the canal and the port and so forth. At the same time, from the volumetric point of view, the approach adopted searches for lightness capable of not only preserve the visual integrity of the surroundings, but mainly to value the landscape in an eloquent manner. More than constructing self-reference buildings, the project defines a new territory: the Vitória Bay itself, with its natural greatness, as a place that is simultaneously natural and artificial, historical and contemporary.

The Museum building is configured by two great beams made of parallel pre-stressed reinforced concrete that are 7 meters high, with only three points of support each, with 20 meters of distance between them. Between the main beams are located the halls, with a standard width of 20 meters and different lengths, distributed in three main levels. These halls are open and they communicate visually to each other and to the square, through inclined window sashes that allow the entrance of indirect light reflected on the floor, but never with direct incidence of sunlight. These halls are primarily destined to exhibitions. The rest of the Program is concentrated in an annexed tower, which measures 22m x 22m and is 23m high, connected to the main volume through bridges.

The theater counts on two lateral galleries, with 10m of width, around the entire building extension, that is 69m long, that provides the circulation of public, artists, technicians, giving access to the dressing rooms and to technical and equipment rooms. Between the galleries, with 30 meters span, there are the Audience, the Balconies, the Stage and the Aisles.

Just like the Museum, the theater is also suspended and only the technical areas under the stage and the restaurant are based on the ground. The restaurant opens to a sidewalk close to the canal, covered by the theater building, that has the extremity pillars on the sea, five meters distant from the territory limit. This technical option is justified by the similarity between the ground under the sea and on land, provided this is a recently performed hydraulic embankment. 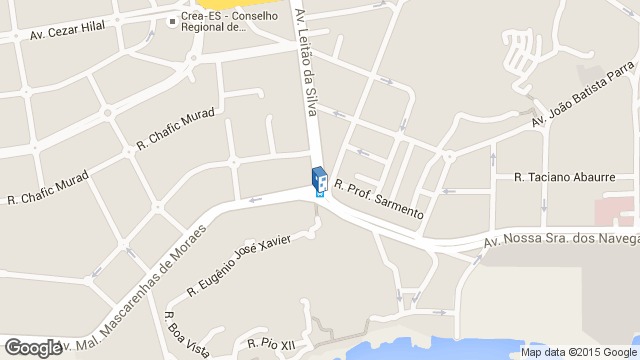 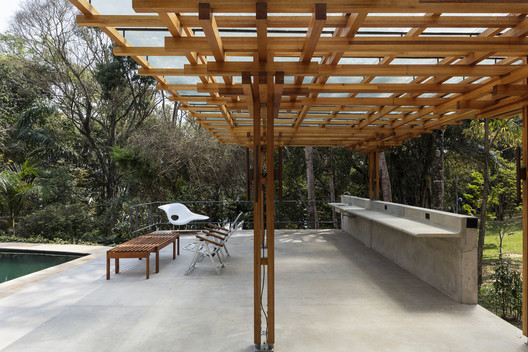 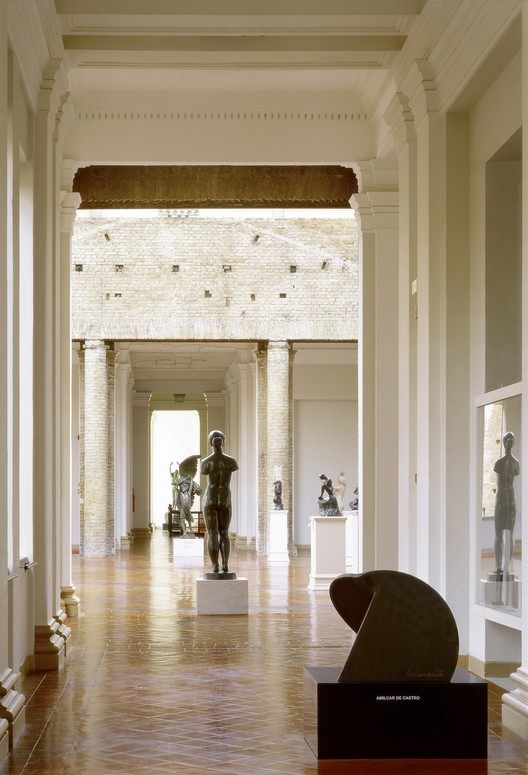 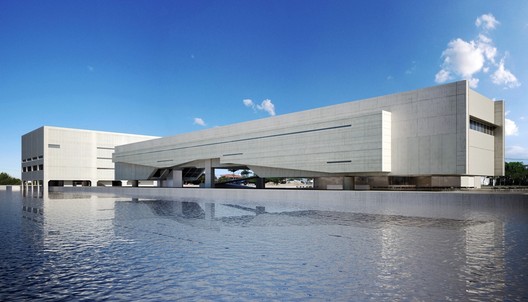