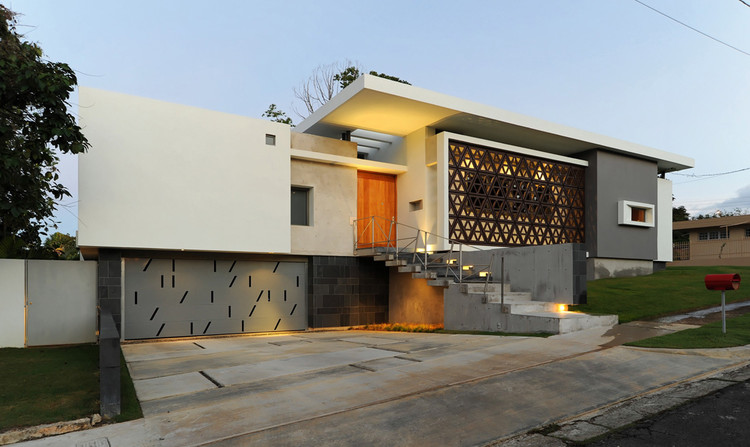 The project is located in a mid-century development of Río Piedras . The neighborhood, typical of upper middle class housing developments of the time, is composed of lots averaging 1,500 m2, with individually designed custom houses. The house sits on a corner parcel, defined by a local main-street on the south-east, and by a cul-de-sac on the north side.

The site is characterized by densely vegetated lots, dominated by large, older trees, and by a rising topography which flattens out on the northern side of the property. The zoning restrictions favor single-family, single-story occupancies.

The residence, commissioned by a young family with two kids, initially started as a substantial remodeling-addition to a 1950's house. But after the initial rehabilitation concepts proved economically unfeasible, it became a "new-house" project. The clients were particularly specific in describing their architectural intentions for the project: "...a structure that would evoke the clarity of mid-century Puertorrican modernism, with the charm and climatic responsiveness of their courtyarded, Moorish-styled, Old San Juan loft. Ironically, the initial design concept started by emulating the essence of the original house . Slowly, the project became one of reconsidering the "Spanish courtyard house" typology, itself an offspring of the Islamic influence on southern Spanish architecture, and an emblematic model of some of the early, native urbanización projects in Puerto Rico like Villa Caparra, and Sagrado Corazón developments.

The neo-Islamic-modernist strategy played off a peripheral massing around a central patio and pool, with minimal perforations on the street side, and a gradual aperture from the interior towards the outside, similar to the Persian Iwan , and the Arabic Sahn . The plot was conceptualized as a perfect square, divided into a 9-square grid, with a central void representing the patio; the grid was then expanded into a 16-square grid, with public, semi-public, and private massings, a central patio, an oasis , a gazebo, and secondary yards, with a lateral multi-square sleeve for possible future expansion .

Architecturally, the resulting house is dominated by a main, squarish volume, defined by the massive, "floating" roof plane, and a series of lesser rectangular bodies that seem to protrude from the larger mass. The frontal façade also features a monumental, triangular Mashrabiya, or screen, which, like the modern brise soleil, or like the native rejas , functions both for privacy and ventilation. The posterior façade also features a series of wooden brise soleils that modulate the interior-exterior transition on the rear, and help mitigate the entrance of sunlight. In terms of spatial organization, the larger, main volume houses the public spaces of the residence , while the private rooms are mainly contained by a secondary, enclosed and partially solid bar-shape structure. The outdoor terrace, pool, and gazebo are conceptually punctured out of the massive, main volume, and are defined by a smaller floating roof, and perforated end wall.

In addition of taking advantage of natural cross-ventilation, the house features a green roof , a rain-water recovery cistern, solar water-heaters, and a high efficiency air-conditioning system; the house was built using fly-ash concrete . 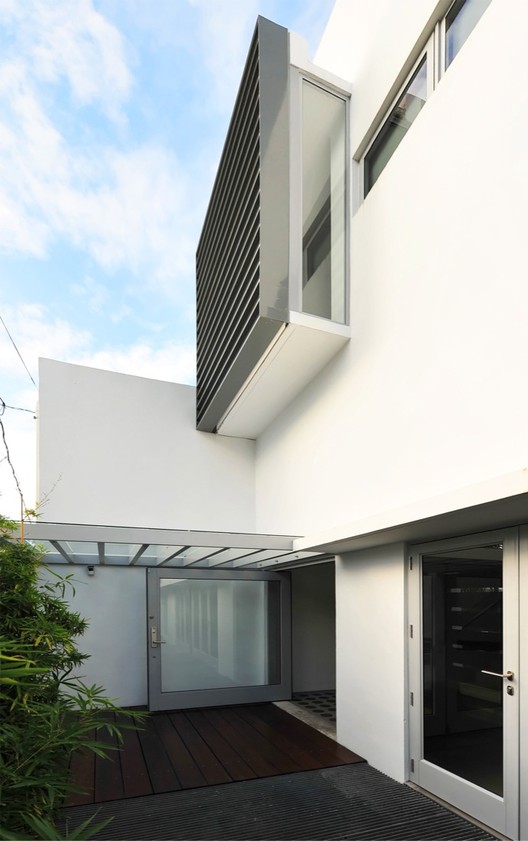