Text description provided by the architects. In the historic Delfshaven district of Rotterdam (The Netherlands), an exciting new housing project is recently completed named Achterhaven. The project, designed by Sputnik Architecture Urbanism Research from Rotterdam, is the result of a competition held in 2004 by Woonbron Housing Corporation.

Delfshaven was originally the Port City of Delft, and Woonbron requested a design that would fit into the historic context of the district. Rather than applying a standard architectural approach of replicating the historic décor of the surrounding area into the new development, Sputnik took an urban approach which blended old with new. According to Sputnik, the reproduction of old facades does not lead to strong integration between existing and new developments, and is not necessarily cost-efficient. Considering the time, energy and craftsmanship required to properly re-create historic facades, these historic replication projects rarely effectively re-create the beautiful canal house facades of the Dutch golden era.

Rather than focusing on Delft’s building facades, the urban structure of Delft stood as the model for the plan. The urban fabric of squares and alleys that is so characteristic of Delft and Delfshaven integrates Achterhaven seamlessly into the surrounding context.

There is an interesting layering of public space in the city of Delft that is comparable to other historic town centres. Rather than having a strong partition between public and private spaces, historic town centres are full of semi-public spaces such as courtyards, alleys, and squares. These semi-private spaces can also include internal spaces such as in chapels, museums, galleries, and cafes and co-exist effortlessly next to houses, as extensions of the public space. Taking their cue from the mapmaker Nolli, who once drew a map of Rome showing the public space flowing into the interior of publicly-accessible buildings, the architectural historians of Crimson reworked Nolli's map for Historic Delfshaven. The difference between the open-blocked historic areas and the later-built areas of closed city blocks is striking. Sputnik took forward this idea of public space layering, including alleys and squares, as the urban solution for Achterhaven to relate the site to its historic counterpart across the harbour.

The resulting urban space is surprising and transparent. The alleys offer glimpses towards the historic monuments opposite the harbour and create a small scale pedestrian friendly area. To ensure liveliness and interaction, entrances to the houses stem from the alleys combined with large windows.

The facades are made of a sturdy red brick and large windows with wooden frames that are placed in deep neggs. Subtle differences in the measurement and placement of the brick surfaces create a nice variety in the composition. During the day, the play of changing shadows brings out the particular details of the brick work. The roof-scape is covered with zinc cladding. Although these materials are all characteristic and traditional for Rotterdam buildings, the final result is contemporary with a strong connection to the past. 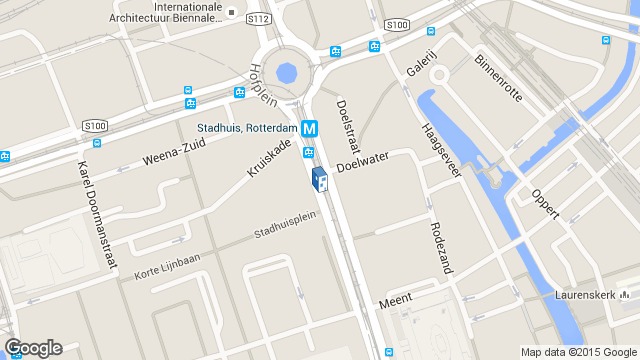 Location to be used only as a reference. It could indicate city/country but not exact address.
Share
Or
Copy
About this office
Sputnik
Office
•••