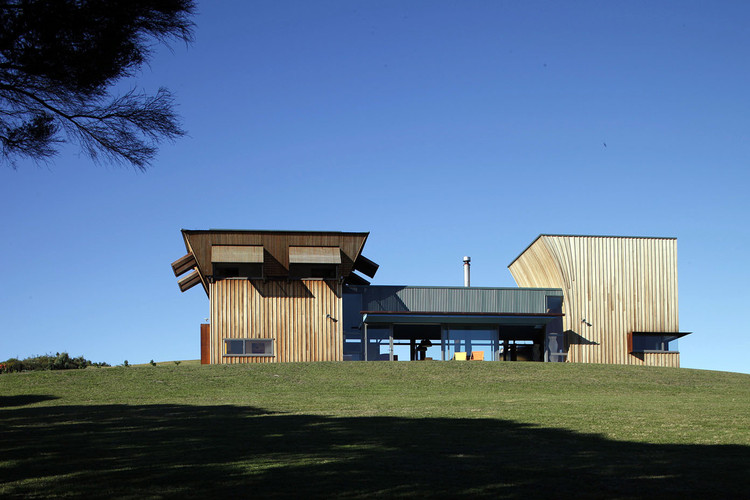 Text description provided by the architects. This is a holiday and weekend house on a rural island near Auckland. The owners are an American professional couple who moved to Auckland from a Pittsburgh ‘brownstone’. They have two young adult children, and wanted space for visitors to stay for a few days. They asked for a house which was “ big on ideas rather than budget” , and one that would encourage a different pattern of living from their life in town.

The kitchen-dining-living space is like a camp-site under an awning. It is an informal glazed pavilion between two cedar-clad blocks- which contain the private rooms. The pavilion shows all, while the boxes are veiled and enigmatic.

A great deal of New Zealand life is spent outdoors, so the pavilion opens on both sides to give a choice between a sheltered eastern court up the slope, and a grass hill falling to the western seaward side- from which the prevailing wind often blows.

The main bedroom adjoins the living spaces in one of the cedar boxes, and looks into a private landscape. Less-frequented sleeping spaces are above it, reached by a private stair from the exterior verandah. The upper floor is divided into diminutive cells. Here, latticed shutters give shade from the western sun, security to the sleeping perches, a pixilated view, and shelter from the storm in driving south-westerly weather.

Contradictions abound. The guest rooms are private, but separated only by light screens, perilous- with glass to near bed level, but made safe by the out-sloping shutters. Each is as risky and cosy as a bird’s nest.

The Music room is a “place to think” in one of the client’s words. It is also a place to play live and recorded music, and to read. From here, only a thin slice of the spectacular view is revealed, and only to a seated person looking up from the simple desk, or up from the keyboard of the grand piano. Light comes edgewise across walls and ceiling, and spills from above down a curved wall which also serves to diffuse sound. It is a calm retreat. 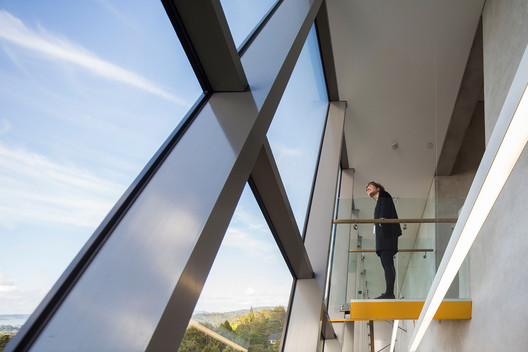 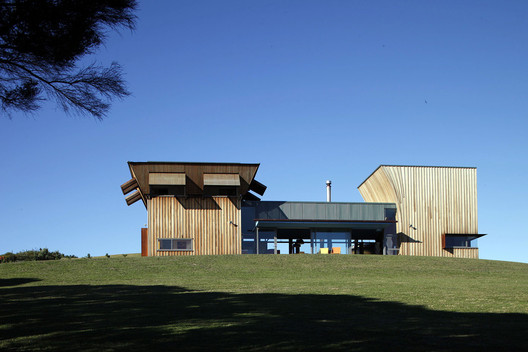