This new zoo, which will become the icon of a new cultural and scientific life in Saint Petersburg, will evoke immemorial time, an era of monumental architecture when much land remained untouched by human development. Designed by architects, Françoise N’Thépé and Aldric Beckmann with landscape designers Bruno Tanant and Jean Christophe Nani, this fabricated urban development will evoke Pangea, the supercontinent described by German meteorologist and astronomer Alfred Wegener. The site appears ordinary as the land conceals some of the mysteries of our origins. It will be home to animal and scientific research where our most recent knowledge, our most advanced techniques create an enveloping environment for visitors to explore. More images and architects’ description after the break.

How do we render this encounter of two aesthetic worlds born of the unlikely overlap of modernity and eternity? We use Copernicus’ transition from the closed world to the infinite universe. According to contemporary German philosopher Sloterdijk, the fundamental form of nature and thought is the sphere. This will be the leitmotif of the following proposal. An optimistic figure of perfection, the sphere offers a gentle transition of the radical changes of the image of the world extending from the disc imagined by Ptolemy with its geo-centred circles to the globe; from the simple inhabited entity to the very incarnation of the world.

The zoo as sphere is seen as a metaphor for the history of humanity, the deep connection between man and his environment and the link between self and other. It makes this coexistence possible by demonstrating the idea that it is possible to produce an ideal world that can easily translate to the real world. The spheres determine the variable boundaries of our living space, whether it has the intimacy of a bubble or the cosmopolitan immensity of a globe. 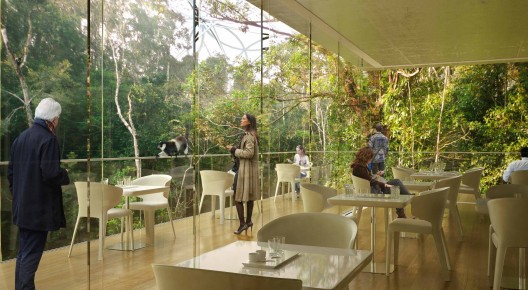 The project will develop a cult of the instantaneous, reveal the fleeting, heighten awareness of passing time, the emotion of the seasons and finally nature as a positive counterpoint to the urbanisation of the city of Saint Petersburg. This architecture and landscape will evoke a rich and multifarious land in which a multitude of animal discoveries are concealed for the pleasure and curiosity of visitors, young and old. The Primorskiy zoological park is cut off from its immediate neighborhood, gaining in density to become wild and mysterious: a park and garden as a place of popular privilege, the nobility of the future city.

Architecture disappears in favor of geography, controlled like the resurgence of a landscape to be discovered. The entity grouping of the set of utilities is crucial to the running of the zoo and becomes a signal, a view point, an identity-based relief between form and shapelessness pierced with cavities. Like a peninsula, it generates an above and a below which communicate and interpenetrate. It develops areas of light, uncertainties, views, reflections and depths offering the first emotions of a visit that will play with weather and seasons throughout six biozones: South East Asia with Japan, Eurasia, Africa with Madagascar, Australia, South America, and North America with the North Pole.

In this introduction to the globe, it will be the zoo’s job to make man, animals and plants relate to each other, through colors, through smells, through the immersion of our body in the body of nature. It will consist in presenting the impossible as possible and the unthinkable as obvious. We would like the zoo to be a place of experiences, sensuous and educational to begin with, and then physiological – a place where you discover nature at the same time as your own nature, the scene of an interaction between man and animals where reason aims at apprehending everything and refusing everything, the universal of belonging and the subjectivity of the individual. Artifice / Nature is the theme of an intriguing, mysterious, attractive, off-kilter strategy at the service of the animals and their well-being.